News from the North

2010 turned out to be another year that was not typical when it comes to weather conditions and lake levels.  We are all wondering what normal is, or what normal is becoming.  Around this time last year we were out doing fisheries surveys (with boats); this year, there were still snowmobiles out on Matinenda Lake.

Overall lake levels and dam operations were within normal ranges in 2010, despite the lack of rain and low levels and flows regionally.  Over the winter Matinenda and area lakes had excellent ice conditions, but there was not a lot of snow.  So far, spring runoff flows have been relatively low.

As you are aware, during the summer of 2009 crews from the Ministry of Natural Resources (MNR) conducted netting operations on Matinenda Lake, along with several other lakes across Fisheries Management Zone’s 8, 10 and 11.  The netting and other monitoring activities undertaken were part of the broad-scale monitoring program which MNR began implementing across Ontario in 2008.

On Matinenda Lake we collected a variety of valuable information, including fish species present, sex, age, length, weight, general fish health, fish contaminant levels, water quality information and invasive species information.  All of this information will be summarized in a State of the Resource Report which will be available no later than 2013, following completion of sampling and data analysis of the remaining lakes. In the meantime, we would like to provide you with the following preliminary results of the netting operations:

Cloud Callout: The lake trout fishing has always been good on this lake… how come the MNR reduced the catch limit and put in a size limit?

Many people across Fisheries Management Zone (FMZ) 10 have asked this question since the new lake trout regulations came into effect last year.  And while it is true that the lake trout population in Matinenda remains healthy, that is not the case for many of the lake trout lakes in FMZ 10.  A five-year study across the Northeast Region from 2000 to 2005 showed that 68% of our lake trout lakes have poor lake trout abundance, and are either being over-fished or are fished very little because the catches are so poor.  Only 32% have good abundance, but nearly half of those lakes are subject to unsustainable levels of fishing pressure.

So why not put the new tighter regulations on just the poor lake trout lakes and leave the old regulations on the good lakes?  Basically, the answer is “for their own protection”.  Anglers would naturally flock to a lake where they could keep more fish and not have to worry about size limits.  Soon, those lakes too would be over-fished, and eventually they would join the ranks of the poor lakes.

If we want to not only maintain the remaining healthy populations, but also improve some of the lakes that are degraded, lake trout harvest needs to be reduced.  The new regulations will help to achieve those objectives, and provide sustainable lake trout fisheries into the future.

It was great to have the opportunity to meet with some of the members of the Lake Matinenda Cottage Owners Association in late January.  It was an opportunity to learn of and answer some of the concerns associated with the Provincial Park.

The park (see map below) is designated as a Natural Environment Class Park, which protects high quality of recreational and educational experiences.  Some of the benefits of Matinenda Lake being within the boundaries of Matinenda Provincial Park include:  Protection of provincially significant elements of the natural and cultural landscapes, including protection from any forestry or mining operations, recreational opportunities, opportunities for exploration and appreciation of the outdoor natural and cultural heritage and to discover and experience the distinctive regions of the province. 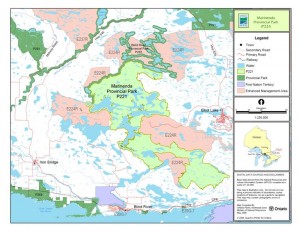 Last season (2010) some of you may have seen our interior crew out on the lake for extensive periods of time.  One of our focuses last season was to inventory all the docks on Matinenda Lake.  We were looking at whether or not the docks were crib docks or floating docks and the condition of these docks.  The purpose of this was to give us an idea of what is out there on the lake and to determine what kind of maintenance cottagers will take on in the future.  Please be advised that for maintenance to occur on any dock, a work permit from Ontario Parks needs to be obtained.   To receive a work permit application, please contact Chutes Provincial Park at 705-865-2021.

We will have field crews out this season in Matinenda Provincial Park.  If you do happen to run into our Ontario Parks field crews, please feel free to stop and chat.  They are a friendly bunch of folks and enjoy having the opportunity to meet with you answer any questions that you may have.